Runtastic has a portfolio of over 15 health and fitness apps which combine traditional fitness models with mobile technology. Runtastic has over 95 million registered users. Using Apptimize, the app has boosted the conversion rate by 44%.

In-app membership upgrades for freemium users are a core part of Runtastic’s monetization strategy. Runtastic wanted to A/B test and improve the conversion rate of users reaching their paywall.

Users are more likely to subscribe if they are shown a user review on the paywall, as opposed to a promotional statement.

Runtastic launched a Dynamic Variable A/B test for their Android and iOS apps. The original variant featured a promotional statement, while the test variant included a real user review along with a 5-star rating. 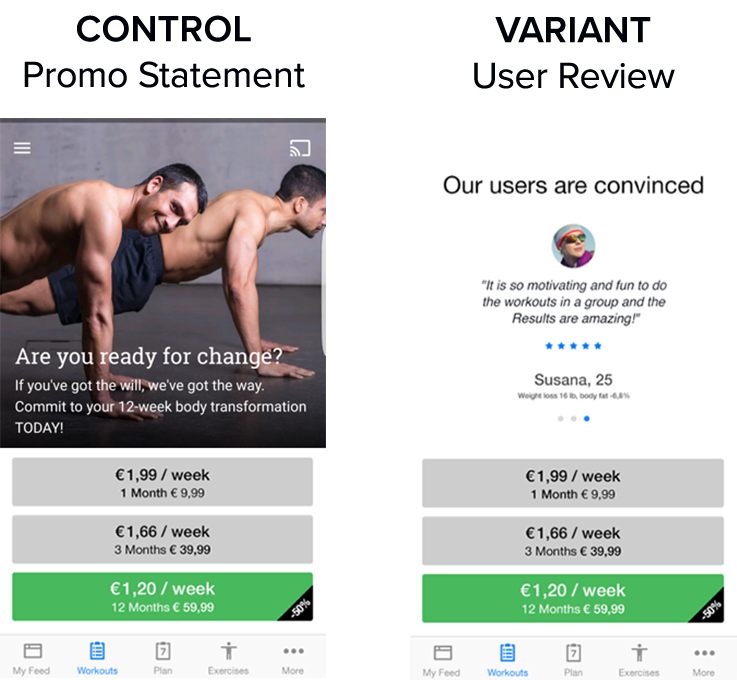 The user review variant produced a 44% increase in paid subscriptions for Android users and no significant change for iOS users. Based on the results of this test, Runtastic only updated their Android paywall screen.

User reviews were an influencing factor for Runtastic’s Android userbase, but they did not motivate Runtastic’s iOS users. Remember to look beyond aggregate data. Segment your data to observe differences in country, operating system, and other demographic data to observe trends. What works successfully for one userbase, might not work equally as well for another.

“If you have a hypothesis or a belief about how your app is going to work best, you should still try to test it. Having that mandatory step earlier almost always worked better. I would encourage you to test it too!”

You can see Lotta’s entire speech where she discusses this A/B experiment and others that have helped Runtastic become one of the leading fitness apps in the world.

How to Optimize in a Fragmented Android Ecosystem

While the latest version of iOS is running on a whopping 90% of all Apple mobile devices, recent studies show that only 17.9% of Android devices are running KitKat. Fragmentation on the Android platform is only getting worse. We’re now...

iOS customers have been using our Visual Apptimizer, a what-you-see-is-what-you-get visual real-time editor, since we launched it in January. Today, we’re announcing the beta of our Android Visual Apptimizer. Now, Android A/B testers can also enjoy: A/B testing without having...