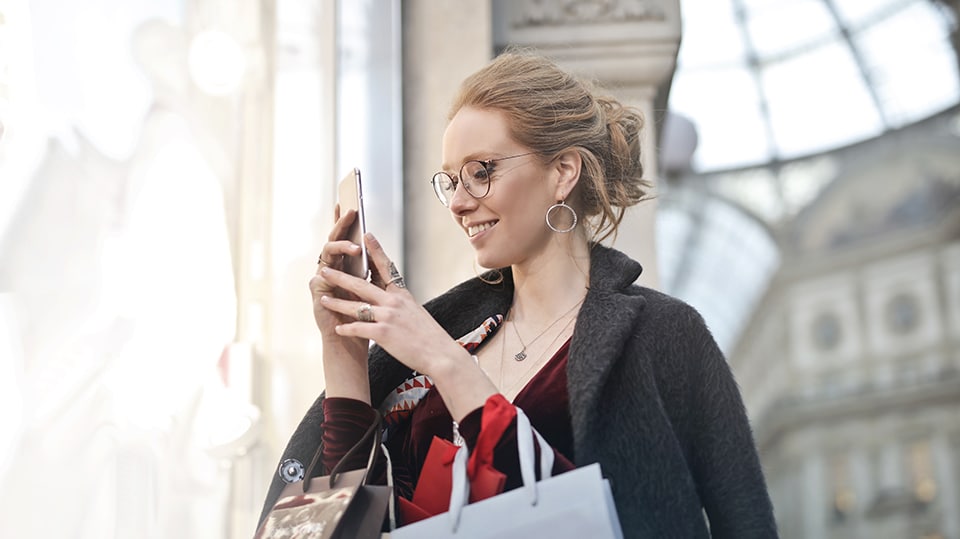 Mobile sales broke records this Black Friday and Cyber Monday as shoppers took to their mobile devices to ring up purchases.

Over 33.5% of e-commerce transactions on Black Friday came from smartphones, up 10% from the previous year, according to a report from Adobe. When combined with the nearly 10% of sales from tablets, mobile transactions accounted for nearly half of $6.2 billion in online Black Friday sales.

Retailers that invested in their omnichannel capabilities reaped the highest rewards over the Thanksgiving and Black Friday shopping season. Macy’s, which strengthened its digital channels this year as part of a growth strategy, announced Friday that the company is on track to hit $1 billion in mobile sales in 2018—a first for the U.S. retailer.

Smartphones is now the “mode of choice” for shopping, said Macy’s CEO Jeff Gennette, and that’s “only going to increase.”

While mobile dominated in online holiday sales, desktop users were still more likely to make a purchase after browsing, according to Adobe. On Thanksgiving, five percent of shoppers on desktop completed a transaction compared to three percent on mobile.

Based on these holiday shopping trends, it’s clear that retailers need to deliver better experiences on mobile if they want to see digital growth.

Below we take a look at three main takeaways from this year’s Black Friday through Cyber Monday shopping trends:

Black Friday used to signify the kickoff of the holiday shopping season but a new report by Adobe shows Thanksgiving Day is now the fastest growing shopping day, seeing a 28% uptick in revenue from 2017. Notably, the report showed that for the first time Thanksgiving prices were as low as Black Friday’s, meaning marketers were well-prepared.

Salesforce reported that consumers went straight from their turkey dinners to shopping on their phones, with mobile usage ramping up after 4 p.m. and peaking between 8 p.m. and 10 p.m., local time.

As consumers began their shopping earlier this year, new internal data at Apptimize shows that e-commerce businesses increased their amount of experimentation and began optimizing their digital experiences earlier than last year. In the two months leading up to Thanksgiving and Black Friday, we saw experimentation peak during the pre-holiday season, with 45% more tests than the same period in 2017.

Product and engineering teams ramping up experimentation in mid-August this year, weeks earlier than the previous two years.

DOWNLOAD: Get our Beginner’s Guide to Mobile Retention to learn what keeps mobile users engaged in your app.

It’s expected that experimentation will slow down now that the holiday season has begun. Experimentation is lowest during the week of Christmas, seeing only 11% of tests than the average week, according to 2017 data from Apptimize.

These reports indicate that preparedness set retailers up for success. As consumers shop with intention on Thanksgiving Day and Black Friday, retailers need to be ready much earlier and understand which strategies to double-down on during peak shopping periods.

2) Optimizing Cross-Platform Experiences is a Must

Mobile apps still play a crucial role in holiday shopping but let’s not forget how web and in-store contribute to closing the sale.

Walmart said its Walmart app helped shoppers prepare for their trip to their local store, such as store maps helping them chart their trip. The app also ties into Walmart’s “Check Out with Me” technology, which lets shoppers use scanner to ring up and pay for items on the spot. The retailer said that within hours of opening its doors for Black Friday, it already “rang up hundreds of thousands of transactions” via it’s Check Out with Me technology.

However, at the same time, Walmart joined a list of retailers that left millions on the table due to technical issues such as websites crashing on Thanksgiving and Black Friday, according to LovetheSales.com. Walmart’s technical problems lasted 150 minutes and affected 3.6 million shoppers, resulting in an estimated $9 million in lost sales.

Other retailers should take note while mobile sales leap forward, they need to optimize the experience from app to in-store or from web to mobile. More preparation is needed from technical standpoint including the critical ability to roll back features on web or mobile if they are causing friction in the buying process. Retailers need to invest more into delivering a seamless experience between the different channels ensure shoppers have different opportunities to complete their purchases.

How will these contribute to Cyber Monday and Christmas sales for these apps? That depends on how many stick around. It’s estimated that 7 in 10 of all app users churn within 90 days, according to mobile marketing platform Localytics.

With an incoming cohort of users, retail apps now have to impress to keep them engaged. While these are new app users, there’s a good chance these users already be existing customers.

Retailers could personalize product recommendations based on what users purchased on Black Friday. They could experiment with promotions based on browsing history or checkout flows to get users who originated on web to convert on their newly install mobile apps.

Download our guide to mobile retention to learn what it takes to retain app users:

How Mobile Ordering Has Changed the Foodservice Landscape

Unlike other industries, such as brick and mortar retail, physical locations will always be critical for restaurants — it’s not just about the food; it’s about the experience. It’s for this reason that most restaurant organizations consider their patrons “guests”...

What Banks Can Learn About Mobile From Fintech

The recent investment surge in fintech firms — $17.4B globally in 2016 — is a strong indicator that banks need to start looking at these upstarts not just as competitors, but also as a source of inspiration. The desire to...

The keynote presentation at Google I/O is (unsurprisingly) focused on native mobile trends and Android’s increasing integration in all aspects of our lives–the home, the car, our wrists. I’m still sitting in the keynote, but here are the top trends...